So I have been working to clean out the old freezer so things don’t get freezer burn and I can actually tell what’s in there. Does that ever happen to you? You just get caught up in specials at the grocery store and life gets away from you and you forget what’s in the old freezer?

Anyways, I got some things out of the freezer, standbys from the garden and fridge, and bam DINNER…

Tonight the line up from the freezer include beef chunks, green peppers, pre-made savory pie crust with thyme (I made a few months ago and froze it- it’s gluten and dairy free), and whole roma tomatoes…  And from the garden peppers (red and light green), thyme, onions (regular and green). From the chickens eggs of course (6-8 depending on the size of the pie dish or quiche your using). Spices include salt/pepper, onion powder, and ground turmeric. Lastly from the fridge cheese and about 4 tbsp. of your milk of choice (not pictured because I forgot to get it out but I used a Colby-jack mix and lactose free milk). 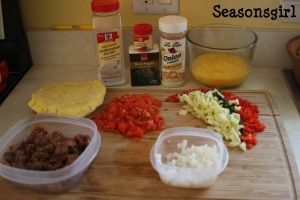 So first I chopped up all the peppers, onion, and tomatoes. Then I chopped the beef up into little bite size pieces so they distributed easier, cooked quicker, and were easier to eat in the quiche. I then beat the 6 eggs with the milk and salt/pepper. (If your pie dish is bigger add an egg or two if it’s smaller use an egg or two less.)

I added about 3 tbsp. coconut oil to a pan (or any oil of your choice that heats well).

Place pan on medium heat and add the chunk beef that you seasoned the salt/pepper/onion powder, and turmeric before you place it in the plan. (I like to put the beef in a bowel and toss it with the spices and let it set for a few minutes.)

When beef is almost done and browning nicely add in the peppers and onions (you can add chopped garlic too) and stir. Season with a little salt and pepper and stir again.

When the peppers are getting a little soft and the onions translucent stir in the tomatoes.

Once the tomatoes are warm and the liquid in the pan has gone down by 1/2 or more; add in the chopped thyme, stir, and turn off the heat on the pan.

While your veggies cook, roll out the pie crust.

Place the crust into you pan of choice. (I had greased the pie dish with butter previously).

I always add a pie ring on the pie dish as it helps keep the crust edges from getting too brown.

Bake the pie crust in a 375* oven for 8-10 minutes until the crust starts to firm and it doesn’t feel doughy. (It usually starts to get a little brown too).

Remove the crust from the oven it should look similar to this in color. 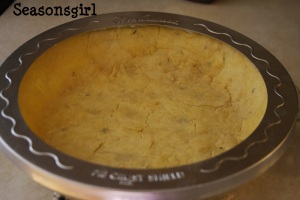 Add in the veggie/meat mixture to the pie crust.

Pour over the egg mixture and distribute things evenly.

Put quiche in the oven and bake at 375* for 30 minutes until the crust is browning and the quiche is set. 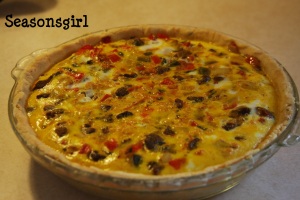 Take quiche out of the oven and let it sit for 10 minutes. 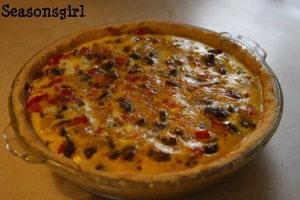 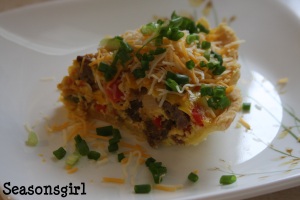 Ideas for toppings: sour cream, cheese, green onions, red onions, bacon (can’t go wrong with bacon) or anything you like

Other idea: Add in cheese to the egg mixture before poring on the veggies/meat mixture.

Use other veggies like zucchini, squash, spinach, or kale which you can add in with the peppers and cook at the same time.

You can also omit the meat and just do a veggie one if you like.

1 cup grated cheese of your choice ( I used Colby jack, but you can use whatever you like, dairy free kind, or no cheese at all)